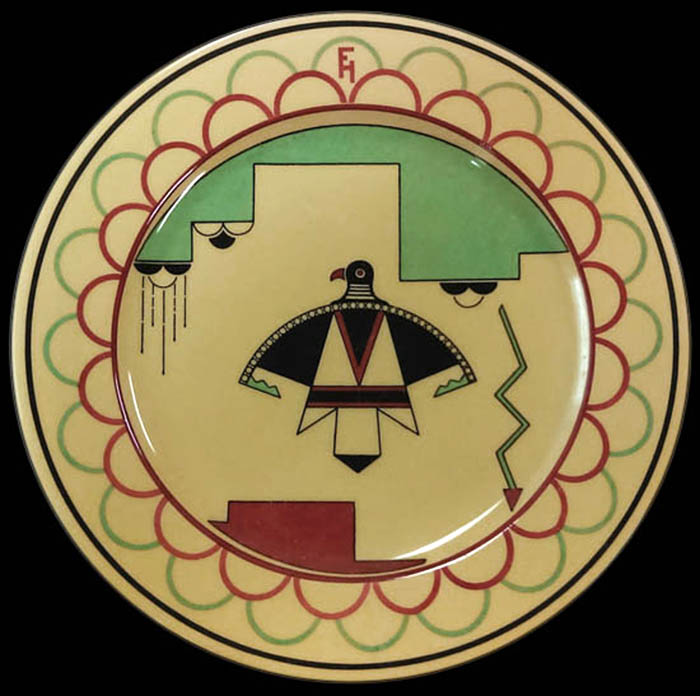 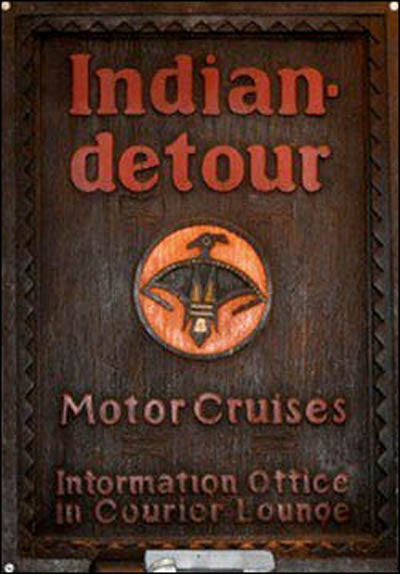 Notes: This is an exceedingly handsome plate that has all the earmarks of a design made exclusively for the Fred Harvey Co., but all we have are clues as to its use.

The connected upper case FH monogram in red at the top of the plate is similar to logos used by the Fred Harvey Co. The stylized thunderbird in the center of the well is very similar to what was used on Fred Harvey Indian Detours printed material. See the sign below with thunderbird that until recently was on display at La Fonda on the Plaza (a former Fred Harvey hotel), advertising the Indian Detours Motor Cruises.

The Indian Detours were introduced by the Fred Harvey Co. in 1926 as part of vacation packages designed to include sleeping car service on the Atchison, Topeka & Santa Fe Railway, overnight hotel stays in Fred Harvey-operated hotels, and bus trips into areas not visible from the train.

The Indian Detour bus trips were headquartered in the La Fonda Hotel that was adjacent to the Santa Fe Railway station in Santa Fe, N.M. Breakfast and dinner for the Indian Detour customers were served in the La Fonda. Luncheon during the tour was served at either the Don Fernando Tavern in Taos, or the El Rita Ranch in Frijoles Canyon, depending on which of the several available tours was taken.

In the book "Mary Colter: Builder Upon The Red Earth," by Virginia L. Grattan, published in 1992 by the Grand Canyon Natural History Association, the following is a paragraph describing the construction of Bright Angel Lodge in 1936: "Above the fireplace Colter placed a huge wooden thunderbird, painted and feathered. It was the Indian symbol of the powers of the air, and it had been the Fred Harvey trademark for the Indian Detours for twenty-five years. The thunderbird was the 'bright angel' from the sky that greeted visitors to the lodge."

In 1926, Fred Harvey enlarged the La Fonda from 46 rooms to 156 rooms as part of the increased occupancy anticipated from the bus tours. The La Fonda's regular china service was the Encanto pattern produced by Syracuse China. It could be that this new thunderbird design was proposed for use in the La Fonda and at the two luncheon stops.

Only one example of this pattern is currently known, and it was part of the Buffalo Pottery collection of Phillip M. Sullivan. Sullivan, who died in 2010, was a well-known collector of Buffalo Pottery and was the author of several price guides on the company's wares.

We suggest that this plate is a pre-production sample prepared by Buffalo in an attempt to secure an order from the Fred Harvey Co. This plate is backstamped "Patent Applied For," but no patent information on it has been found in the US Patent Office. Buffalo probably planned to apply for a patent but did not because the china order was never placed. Again, this is all just conjecture.

This design is shown on Buffalo's Colorido Ware yellow body. Border design of two rows of fish scale-style arches with outer row in green and the inner row in red. Red FH monogram at the top of the rim border. Black rim line and red verge line. The well design is composed of a stylized thunderbird, similar to designs created by artist Willard Clark. Above the thunderbird is a right-angled shape with a green background. Attached to the lower part of the green section are black arches with stylized rain and a green lighting zigzag. A red shape is below the bird.