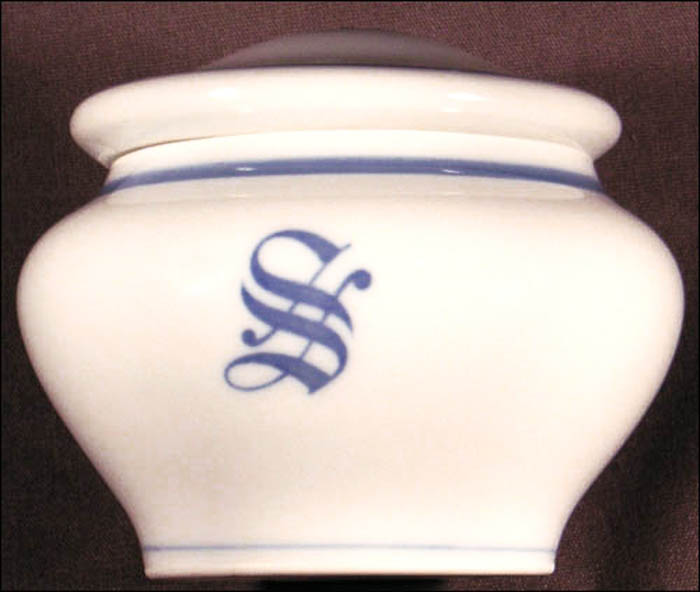 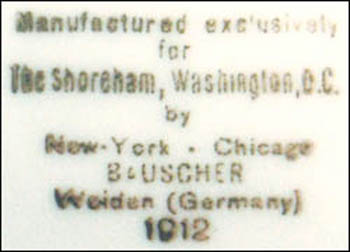 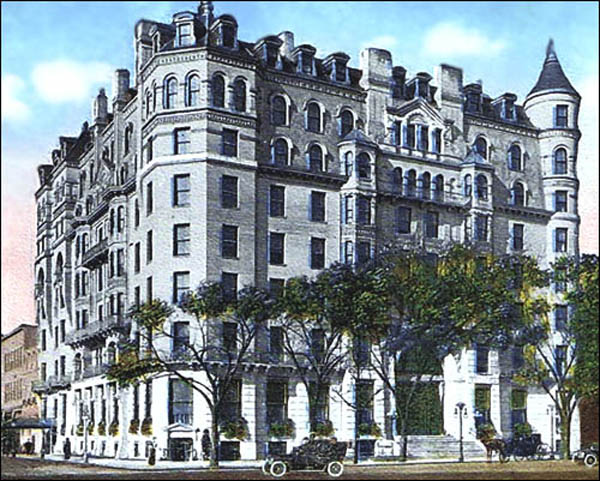 Notes: This eight-story, Queen Anne-style, 250-room hotel was built in 1887 for then Vice President Levi P. Morton. It was named for Morton's birthplace, Shoreham, VT, when it opened at 15th and H Streets, NW, in Washington, D.C., in 1889.

In 1902, the dining room was remodeled with onyx wainscoting below yellow and green paneled walls. The ceiling had ornate plaster details with gold leaf trim. The hotel was remodeled once again in 1912-13. This time the dining room was finished in French Gray with draperies and carpets in Old Rose. It was in connection this remodeling that this, and two other china patterns were created.

The Shoreham closed in 1928 and was then torn down. A new Shoreham Hotel, on Connecticut Avenue, opened in 1931.

This covered sugar is crested with an Old English style S in blue.

At least three other patterns were used by the Shoreham at this original location. Bauscher produced a ribbon and bellflower border in green that was dated 1913. Bauscher also produced plain white china decorated with a coin gold rim band with pin line details on spouts and handles. This pattern was also dated 1913 and may have been used in the informal Colonial Room (Grill). Maddock supplied Lamberton China crested with the hotel's rampant hippocampus with outstretched claws, over a torse ribbon bar, logo. The border is #2234. Maddock's pattern was supplied by James M. Shaw & Co. It probably dates from the early 1920s when this logo was being used on menus.