Born in New Mexico on Christmas Day in 1887, Conrad Nicholson Hilton became one of America's premier hoteliers as the founder of the Hilton Hotels.

The modest start of a vast hotel empire began in 1919, when Conrad Hilton first purchased a two-story, red-brick hotel, known as the Mobley Hotel in Cisco, Texas. From 1919-1923, Hilton purchased other Texas hotels, including the Melba and Terminal hotels in Fort Worth, the Waldorf in Dallas, and he leased the Beaton in Corsicana. The profits from these hotels enabled Hilton to move forward with the first hotel to bear his name.

The first hotel built by Conrad Hilton – the Dallas Hilton – opened in 1925, followed by the Abilene Hilton, and other Texas Hilton hotels in Waco, Marlin, Plainview, San Angelo, Lubbock and El Paso. Before construction began on the Dallas Hilton, as early as 1923, Hilton envisioned owning a chain of hotels, where customers would receive maximum service at a minimum price; this concept became his Minimax service trademark. In 1929, he consolidated his properties under the Hilton Hotels, Inc.

In the Great Depression years that followed, Hilton suffered severe financial losses, and consequently in 1931, his hotels were taken over by the National Hotels Corporation, owned by W.L. Moody and his son Shearn Moody. Undaunted by financial setbacks, Hilton slowly recovered most of his original financial holdings, and in 1934, he resumed independent operations of three Hilton Hotels – in Lubbock, Dallas and Plainview – followed soon thereafter by the reacquisition of the El Paso Hilton and a new hotel – the Longview Hilton. By 1939, Hilton had paid his hotel debts in full, expanded his hotel chain from Texas to California, and acquired The Breakers (1937) in Long Beach and the Sir Francis Drake Hotel (1938) in San Francisco. 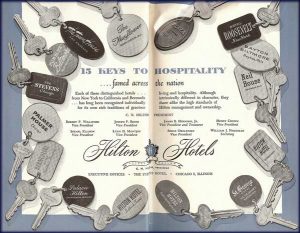 In the prosperous post-war years, Hilton acquired a number of landmark hotels outside of Texas, including the largest hotel in the world at the time – the Stevens Hotel (1945) in Chicago, which was later renamed The Conrad Hilton in November 1951, and then became the Chicago Hilton & Towers in October 1985. His landmark acquisitions during this period also included the Palmer House in Chicago; the Waldorf-Astoria and Plaza in New York; the Town House in Los Angeles, CA; and the Mayflower in Washington, DC. At left is a 1948-49 Hotel Red Book ad of landmark Hilton Hotels. Conrad Hilton acquired so many hotels that The New York Times Magazine dubbed him the "Collector of Hotels" subsequent to his $36 million purchase of the Waldorf-Astoria.

Hilton acquired the Statler Hotel  chain in 1954 for $111 million, making it the largest hospitality company in the world at the time; the acquisition was recognized as the largest real estate transfer in the United States since the 1803 Louisiana Purchase. That same year, he took over management of the Shamrock in Houston, Texas, and purchased the hotel one year later. All hotels acquired by Conrad Hilton eventually carried the name Hilton, excluding the Waldorf-Astoria and the Plaza in New York, and the Palmer House in Chicago.

In the 1950s, expansion efforts included the resort-like Hilton Inns, with the first location in Long Beach, CA. Hilton opened the San Francisco Airport Hilton in 1959, pioneering the idea of airport hotels. He also started a franchise of highway hotels in 1966, under the wholly owned subsidiary, the Statler Hotels & Motels, Inc.

On the international front, Hilton expanded through the establishment of his subsidiary the Hilton Hotels International, Inc. (April 1948); and by the end of 1964, he had acquired and built as many as 39 international hotels, equal in number to his U.S. hotel properties.

When Conrad Hilton died in 1979, his corporation owned one of the largest hotel systems in the world with 185 hotels in the United States and 75 international hotels. After Hilton's death, the Mobley Hotel in Cisco, TX was restored in the 1980s with contributions from the Hilton Foundation. The original two-story, red-brick hotel – described by Conrad Hilton in his 1957 autobiography, Be My Guest, as his "first love" and "a great lady" – now is home to the Cisco Chamber of Commerce and serves the public as a museum and community center.